Could Your Snoring Problem Actually Be Sleep Apnea? 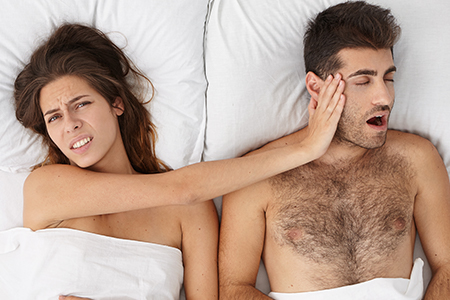 In most cases, snoring is fairly harmless; though for the person trying to sleep next to a snorer, it may not feel that way! However, in other instances, snoring can actually be a sign that something is more seriously wrong with your health.

Sleep apnea is a very common problem, but alarmingly, fewer than one in three people realize that they have it. Due to the fact that it’s common, it’s easily dismissed as ‘one of those things. However, sleep apnea can actually have a serious impact on your health.

Snoring is considered such a common problem that it’s not often taken seriously. However, whilst not all snorers have sleep apnea, the vast majority of sleep apnea sufferers do snore. There are other signs that you need to look out for. If your partner tells you that you stop breathing during the night, this is a classic symptom. Likewise, if you find yourself feeling exhausted in the morning, this is an indication that your sleep pattern is being disturbed, which again, is another sign.

In addition to these symptoms, look out for:

When Should You Investigate Your Snoring?

If you have no other symptoms apart from snoring, it’s probably not sleep apnea. However, if your partner tells you that you sound like you’re struggling to breathe in the night, or you wake up each morning feeling tired, it’s time to book an appointment to get things checked out.

As Professor John Gibson, a sleep apnea expert at the BTS says: ‘Sleep apnea is a major cause of disability because it causes daytime sleepiness. This can seriously affect social behavior, work performance and the ability to drive safely.’

In short, don’t put it off. Arrange to be tested by a specialist, who will be able to work with you to resolve the problem. If you’d like to arrange an appointment with Blackstone Medical Services today, just call 888 710 2727.